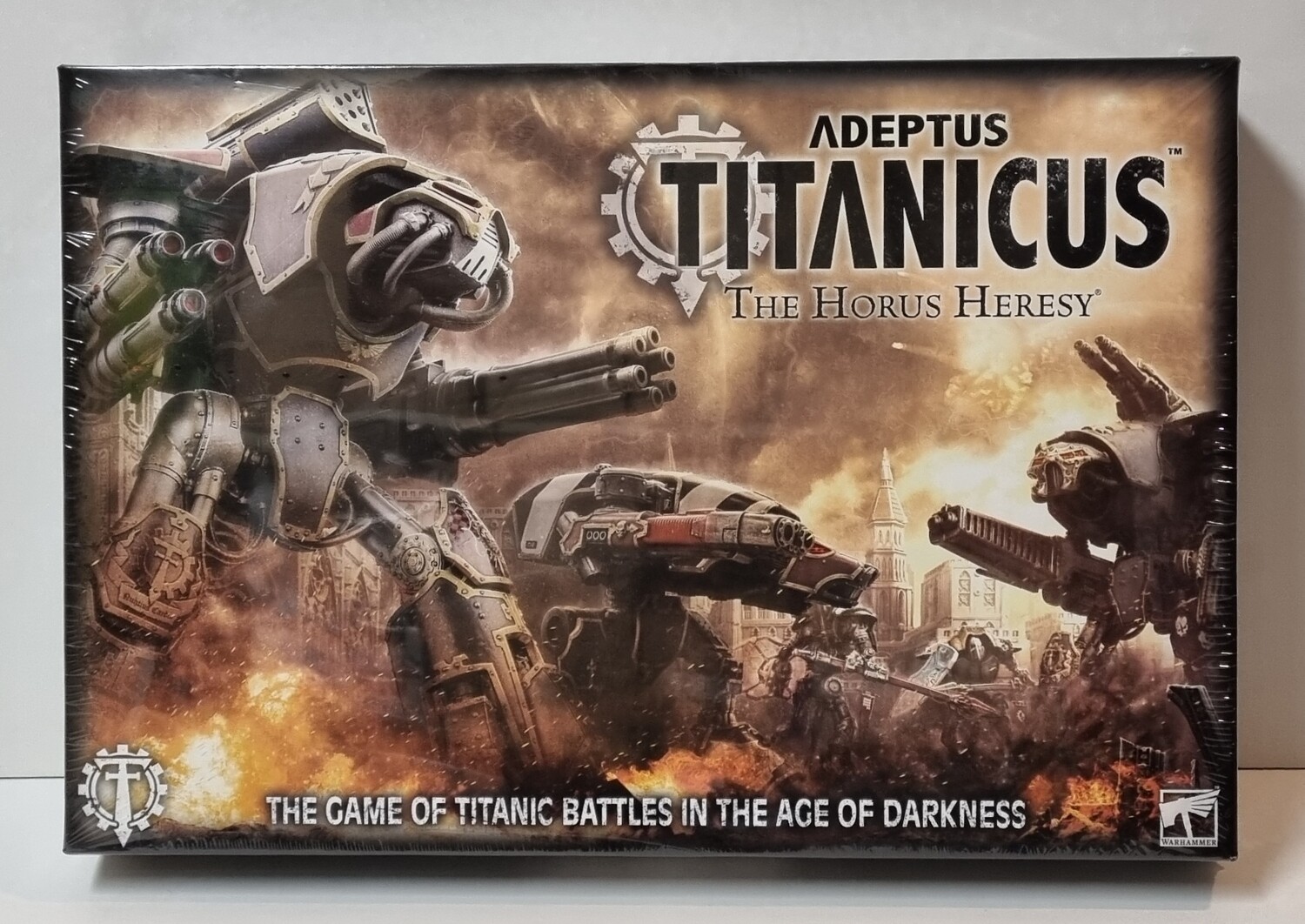 The galaxy is in flames. The Emperor’s glorious vision for Humanity is in ruins, his armies locked in brutal civil war. The greatest of these bitter combatants are the towering god-engines of the Adeptus Titanicus. Those Titan Legions that remain loyal to the Emperor of Mankind fight boldly to stem the tide of treachery, holding the line on countless worlds as the Warmaster’s forces advance inexorably on Terra. The Traitor Titan Orders march at the vanguard of the Warmaster’s hosts as they seek to bring the Imperium to its knees in the name of their twisted cause…

Adeptus Titanicus is a tabletop game of devastating combat between awe-inspiring god-machines, set during the civil war that tore the galaxy apart. Two players take control of a variety of Titans – colossal, bipedal war engines covered in thick armour and weapons which can level a city in a single salvo. It is a strategic challenge in which you pit your skill and cunning against your opponent in a battle to the death; a test of tactical skill demanding the management of the resources at your disposal, determining the optimal reactions to the evolving state of the battlefield.

This boxed set is your perfect starting point for the game. It includes six plastic Citadel miniatures – two mighty Reaver Titans, two nimble Warhound Titans and two noble Cerastus Knight-Lancers. You'll also find a 96-page softback rulebook and everything else you need to start playing, including templates, cards, command terminals, tokens and dice. Build your battlegroup and join the battle for Humanity's future.

In this boxed set you will find:

– 1x 96-page softcover Adeptus Titanicus rulebook. This contains the full rules for the game, and will teach you the basics as well as introducing you to advanced rules and tactics, and three different ways to play.

– 1x Reaver Battle Titan. This plastic model comes with chainfist, volcano cannon, melta cannon and turbo laser destructor options. It is supplied with a 105mm round base.

– 1x Reaver Battle Titan. This plastic model comes with power fist, laser blaster, gatling blaster and Apocalypse missile launcher options. It is supplied with a 105mm round base.

– 2x Warhound Scout Titan. These plastic models each come in 62 components, including multiple weapons options. Each has an 80mm round base.

– 6x Battlefield Assets, plastic models used to represent stratagems on the battlefield that can interact with your Titans in different ways

– 3x Transfer sheets – one each for Reaver Titans, Warhound Titans and Cerastus Knights